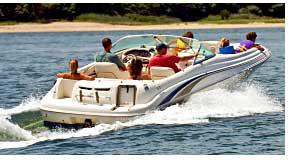 Plenty of fun places to go boating in Nevada. Whether it's a family outing or just the guys going fishing or skiing, boating is fun for all. And there is boating in all corners of of the state. Nevada is a boating paradise, get out in the great outdoors and enjoy it every chance you get.

For further information about boating in Nevada, contact the Nevada Department of Wildlife - Boating Licenses located at 1100 Valley Road, Reno, NV 89512. The phone number is 775 688-1500.

This website focuses on all aspects of boating including new and used boats for sale, boat rentals, financing, repairs, accessories, storage and more.

Many outdoor enthusiasts are taking up the game of pickleball for exercise and fun. View locations of Nevada pickleball courts! After a morning of pickleball, go for a relaxing boat ride.

Rivers & Lakes For Boating in NV

Gather up the family along with some snacks and refreshing beverages and go enjoy the thrill of fresh air in your face and the sun on your back. When boating you can see parts of Nevada accessible only by water. Often you'll see birds and wildlife not normally seen in city areas. Plus, sunrises and sunsets always seem more majestic when you are in the great outdoors.

Boating opportunities in other states.